Development Environment for Modelling and Visualization of Interactive Multimedia Applications
Regarding the enormous potential of virtual worlds, appropriate technical systems are being developed in the Mixed3D project to
enable work in virtual environments. Among these systems are autostereoscopic displays and video based input devices which
evaluate head, gaze and hand movement of the user and convert these into input data for the VR environment. In this way users may use various modalities for intuitive interactions.

The Workbench 3D consists of a .NET library (API) written in C# and a corresponding core application which manages plugins and drivers written with this API. In this way interactive systems can be created for a variety of fields in science, industry, culture and entertainment (Figures 2 and 3). It is especially easy to develop experimental systems (for example in usability research) and demonstrators which can be used on trade fairs.
In order to guarantee flexible adjustment to different hardware configurations, the Workbench 3D supports visualization on multiple monitors (combined 2D/3D displays), communication between computers via .NET, environmental sound as well as voice input and output using an avatar and the force feedback device PHANToM(TM) from SensAble Inc. The inheritance methods of the .NET Framework make it possible to enhance the API with other technologies.

In the 2D area, the graphical interface design is realized with Visual Studio tools (Designer). The Workbench 3D scene graphs describe the VR environments (3D GUI) which are then rendered in arbitrary windows in real-time. Elements such as cameras, lights, geometric primitives, enhanced interactive objects and external model files can then be dynamically managed including all appending attributes like transformations, colours and textures. An event and animation system helps the programmer to define new interactions. The 3D GUI can likewise appear playful or functional Design.

Another powerful feature of the Workbench 3D , granted by the special traits of the Fraunhofer HHI 3D devices (autostereoscopic displays and 3D trackers), are applications in the field of Mixed Reality combined with natural interactions. In this way users may interact with virtual objects in a new dimension or navigate in complex database contents. The simple manner to write new applications for the Workbench 3D with integrated 3D technologies provides the designer and ergonomist with more room for creating user-friendly, experience orientated and forward-looking computer systems. 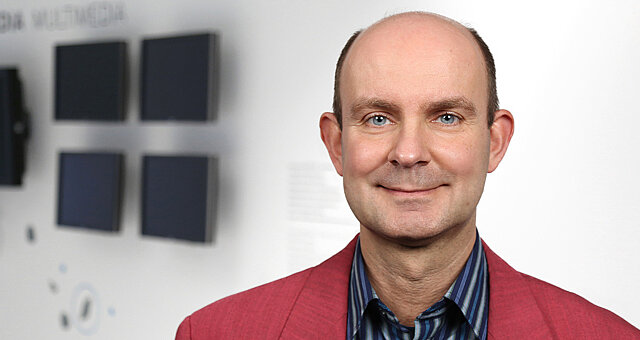