Terahertz is a key technology for non-destructive material testing. Major advantages are examinations without physical contact and the analysis of complex systems with a low contrast range, in which established methods like ultrasound usually fail. The Fraunhofer Heinrich Hertz Institute HHI has successfully developed a cost-efficient and compact measurement system that conducts real-time measurements of the thickness of multi-layer systems for the first time, an essential technology e.g. for lacquering lines. The new terahertz measurement system T-Sweeper will be presented live at the Hannover Messe trade fair from April 23 to 27, 2018 (Fraunhofer booth C22, hall 2).

Terahertz radiation was already a major topic a good ten years ago, in connection with body scanners for inspecting passengers during airport security screening. Terahertz radiation was also to be used in measurement systems for material testing and inspection of components. However, in spite of high expectations the breakthrough for terahertz technology took a long time. Compared to classical methods for non-destructive material testing today, such as X-ray radiation and ultrasonic, terahertz was long considered simply too expensive. In recent years however, great progress has been made: An increasing number of systems has been introduced with designs based on standard components, making them significantly more economical to build. These developments are already raising the interest of potential users. System costs certainly will have to be cut further and the complexity of the systems will have to be reduced before terahertz technologies are established as an instrument in industrial process monitoring.

Cost-efficient and in real-time

Current developments at the Fraunhofer HHI could mean a considerable boost for the terahertz technology. A research team led by Björn Globisch, head of the terahertz research group at Fraunhofer HHI, has successfully developed a measuring device that replaces the previously used femtosecond pulse laser with compact continuous-wave laser technology. The fact that this continuous-wave measurement system is capable of eight measurements per second is key to allow real-time measurements without the use of a pulsed laser for the first time. The scientists will present this terahertz measurement system at the Hannover Messe trade fair and will give a live demonstration of non-contact layer thickness measurement for various multi-layer systems.

The principle employed by the Fraunhofer HHI to generate terahertz radiation is based on an optoelectronic process. Using a special semiconductor component, the beat of two continuous-wave lasers is converted into terahertz radiation, which corresponds exactly to the difference frequency of the two lasers.

The lack of significant success of terahertz technology in the past is largely due to the properties of the semiconductors used. These properties could initially only be achieved with materials that required illumination at a wavelength of 800 nanometers. This rather exotic wavelength means both the lasers and the optical components of the terahertz system are much too expensive and not robust enough for industrial applications.

"This is why we developed a semiconductor that can be excited by laser light at a wavelength of 1.5 micrometers," explains Globisch. "This matches the wavelength standard in optical telecommunications technologies, which means there are plenty of cost-effective and high-quality optical components and lasers available." On the way to a competitively viable terahertz system for material testing, however, another obstacle had to be overcome: The pulse laser, on which all conventional real-time capable terahertz systems are based, is a decisive cost factor in existing systems. Femtosecond lasers are not only technologically complicated and expensive on their own, terahertz spectrometers using pulsed lasers require additional optomechanical components that have to be precisely produced and adjusted in highly complex procedures.

Continuous-wave terahertz systems are already available, but they need periods ranging from several seconds to a matter of minutes to capture a measured signal. In contrast, industrial applications often operate like this: In the production, a robot arm moves over measurement points on painted/coated components and measures the coating thickness. Since the production cycle has to be maintained, there is only little time per measuring point. Until now, the measurement speed of continuous-wave terahertz systems was too slow to be viable in non-destructive testing applications.

Fraunhofer HHI has solved this problem using lasers that can be adjusted extremely fast (Finisar® WaveSource™) and by modifying electronics, data capture and algorithms to accommodate the high speeds required. This combination has increased measurement speeds by a factor of 160 compared to previous systems. This has made it possible for the first time to conduct material testing in real-time with continuous-wave terahertz systems. This system will be presented at the Hannover Messe trade fair in a live demonstration.

Inspection of paints and coatings is an important application of non-contact terahertz measurement technologies. Here, layer thickness measurement makes up a significant part of quality assurance and production monitoring. Thus, for example, minimum thickness is ensured, consumption of resources is optimized by reducing the amount of excess material used and subsequent rectifications are avoided. Today, manual eddy current devices can be used with metallic substrates such as automotive sheet metal. This method however, fails on poorly conductive fiber-reinforced composites. Ultrasound finds application in this context, but at the costs of mechanical contact. "There is a substantial need for a reliable measurement technique," says Globisch, "because the market for fiber-reinforced composites is growing in the automotive, aeronautics and wind power sectors." This is where the major advantage of the terahertz technology lies: Measurements are non-destructive and contactless, so that even coatings that are not completely dried can be measured as well. In addition, the quality of the results is not dependent on temperature and multi-layer systems can be directly resolved. Finally, terahertz radiation is non-ionizing and not harmful to humans due to its low power.

Although the new terahertz measurement system can be built using cost-effective standard optical components, it is currently even more expensive than for example ultrasonic devices, which are manufactured in quantities of several hundreds of thousands. "However, the prices will become similar with future series production," Globisch predicts. The advantages of the measurement technique and the current progress have convinced the researcher that the terahertz method will establish itself as a measurement technique for non-destructive material testing in the years to come.

At Hannover Messe, Fraunhofer HHI acts as a representative for the FMD. 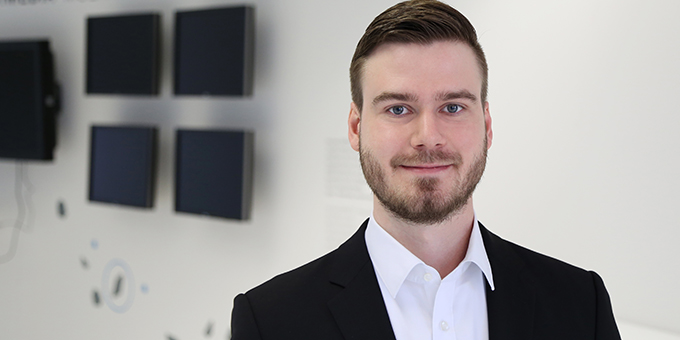