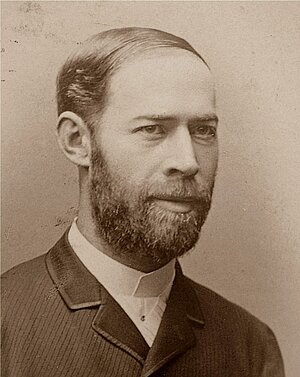 Heinrich Hertz, after whom the Fraunhofer Heinrich Hertz Institute HHI is named, was among the most distinguished German physicists of the 19th century. He was the first researcher to successfully prove the existence of electromagnetic waves, thereby paving the way for modern radio technology. February 22nd would have been his 160th birthday.

Heinrich Hertz originally wanted to be an engineer, but decided to study mathematics and physics after one semester. He earned his doctorate at just 23 years old with his thesis on the rotation of metal spheres. Subsequently Hertz pursued a teaching career as associate professor and professor at universities in Kiel, Karlsruhe, and Bonn. During his professorship at the Technical University in Karlsruhe, he made an important discovery in 1886: electromagnetic waves. In his experiment he succeeded for the first time in experimentally generating free electromagnetic waves and proving that these behave and spread out like light waves. Modern radio technologies such as the telephone, radio, or television would not have been possible without this discovery. His name remains with us in everyday modern life – the abbreviations “kHz” and “MHz” on the scales and displays of radios stand for “hertz”, the unit of measure for a frequency. It was named after him in 1930 and introduced internationally in 1933.

The Berlin research institution was founded in 1928 as the “Heinrich-Hertz-Institut für Schwingungsforschung” (Heinrich Hertz Institute for Oscillation Research). Research focal points in keeping with the eponym Heinrich Hertz were telegraphy, telecommunications, and high-frequency technology. HHI is part of the Fraunhofer-Gesellschaft since 2003. Fraunhofer HHI is the world leader in the research of mobile and optical communication networks and systems, as well as the encoding of video signals and data processing.