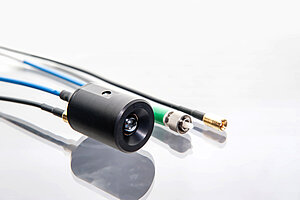 Fraunhofer HHI’s Vector Network Analyzer is the three millionth international patent application submitted under WIPO’s Patent Cooperation Treaty (PCT). The World Intellectual Property Organization (WIPO) is one of the 17 specialized agencies of the United Nations. WIPO was created in 1967 to encourage creative activity and to promote the protection of intellectual property throughout the world.

The Vector Network Analyzer is part of Fraunhofer HHI’s Terahertz and High Frequency technologie. Terahertz is a technology in which nondestructive testing of components and surfaces is possible. Until now, these devices and, in particular, the sensor heads have been expensive and unwieldy. Researchers at Fraunhofer HHI have now succeeded in making sensor heads more compact and, thus, cheaper, which facilitates their handling considerably. First prototypes are already being used for the production of plastic pipes. They are also very well suited for analyzing coatings of fiber composites.