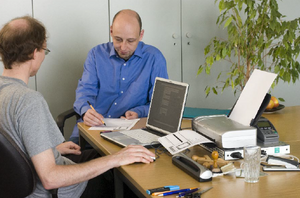 Extending your passport, applying for a police certificate of conduct, or registering a street party – all of these things cost time and effort. How great would it be if the town hall came to you instead: to your workplace, the shopping center, or the farmers’ market?

The Heinrich Hertz Institute helped to make the idea of a mobile town hall “briefcase” a reality. Laptop, printer, scanner, chip card reader, payment terminal, and a wireless Internet connection – these mobile components for a town hall briefcase were developed by the Institute as part of the “Mobile Citizen Services” (MoBüD) research project between 2002 and 2005. The mobile town hall briefcases were first tested in the Berlin districts of Pankow and Spandau, and their use was later extended to 15 locations in Berlin.

The “Mobile Services” group at HHI advised authorities and IT service providers about all issues concerning the introduction of mobile administration, including a viable security concept. The technical components of the devices, and the software, were coordinated with customers’ conditions and requirements. Interested local authorities could attend workshops that were carried out in conjunction with the “Städte- und Gemeindebund” (Germany's Association of Towns and Municipalities, DStGB) and the “Bundesdruckerei” (Federal Printing Office).

Until December 2008, the Institute and partners from the Netherlands, Sweden and Estonia had contemplated how the idea of mobile services can be implemented throughout Europe within the framework of the EU project CIDRE.

The city of Berlin currently advertises its mobile public services with the slogan “We meet you halfway!” (“Wir kommen Ihnen entgegen!”), in addition to the regular appointment hours in the town halls. The public's reaction to this service has been overwhelmingly positive.