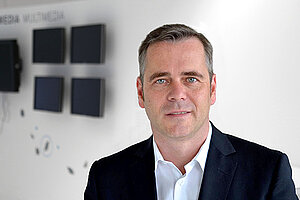 The Leopoldina Committee has elected Prof. Dr.-Ing. Thomas Wiegand, Professor of Media Technology at the TU Berlin and Executive Director of the Fraunhofer Heinrich Hertz Institute HHI, as a member. The election as a member of the Leopoldina is considered one of the highest scientific awards presented by a German institution. Membership is associated with the honour of belonging to a time-honoured scholarly society and active participation in various activities. Wiegand will be involved in the Information Sciences section in the future.

Wiegand and his scientific research groups at TU Berlin and Fraunhofer HHI have worked intensively on the topic of video data coding. In this process, he has consistently incorporated the scientific results into international standardization. Thus, he was able to enrich the standards H.263, H.264/MPEG-AVC and H.265/MPEG-HEVC with his proposals. He was also able to make a major contribution to the success of H.264/MPEG-AVC in his role as co-chair of the standardization group and as editor of the standard. Today, more than 50 percent of the bits on the Internet are encoded with H.264/MPEG-AVC.

Wiegand has been Director of the Fraunhofer HHI since 2014. His research area includes scientific work on video coding, wireless communication, machine learning, the human visual system and computer vision. The range of issues extends from basic principles to technology research to demonstrators and prototypes.

Founded in 1652, the Leopoldina is one of the oldest science academies in the world. As Germany's National Academy, Leopoldina has represented German science in international committees since 2008 and takes an independent stance on scientific foundations of political and social issues. Outstanding scholars from all over the world are elected to the approximately 1500 members. In addition to scientists from Germany, Austria and Switzerland, a quarter of the members come from other countries around the world. Members of the Leopoldina include many famous personalities, including Johann Wolfgang von Goethe, Charles Darwin, Marie Curie and Albert Einstein. 178 members of the Leopoldina received a Nobel Prize.