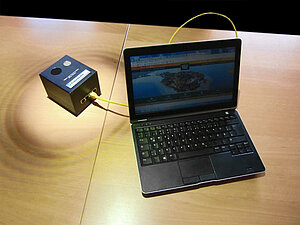 Did you know that wireless data transmission is not only possible via WLAN? Visible Light Communication (VLC, also known as Li-Fi) enables the realization of optical WLAN environments - especially where radio-based solutions reach their limits. Fraunhofer HHI looks back on more than 20 years of experience with indoor Li-Fi systems. The institute has already implemented several application projects with other partners.

Visible Light Communication is an alternative to conventional WLAN technology. Data is also transmitted wirelessly, though not with radio waves but via modulated light for example from LED lighting. Existing LED lighting infrastructure can be easily modified and reused. Li-Fi offers an additional spectrum for dense wireless networks, has a low susceptibility and is not affected by other radio waves or electromagnetic fields.

In recent years, Fraunhofer HHI has implemented various projects with VLC in cooperation with partners from industry and the public sector. For example, parameters for multimedia environments at major sporting events were developed together with the Red Bull Media House in 2015. The project VLC Mainau was launched in the same year, where in one of the first field tests worldwide an existing conference room was equipped with VLC by Fraunhofer HHI. Since 2017, the Fraunhofer HHI has also been involved in a project to digitize the classroom at Stuttgart's Hegel-Gymnasium. The plan is to implement the technology in the long-term by integrating it in the room lighting and in end devices such as laptops, tablets and smartphones. In June, the industrial project OWICELLS was successfully completed with a final presentation at the BMW plant in Munich. The presentation demonstrated a Li-Fi communication with a mobile robot, while the robot carried out usual production processes in a 5x5m² production cell.

The participating project partners are very enthusiastic about VLC. "The positive user reactions show that this technology will find a place in our future everyday life. The constructive comments are already flowing into the further development of our systems," says Fraunhofer HHI project manager Anagnostis Paraskevopoulos, drawing a positive balance.