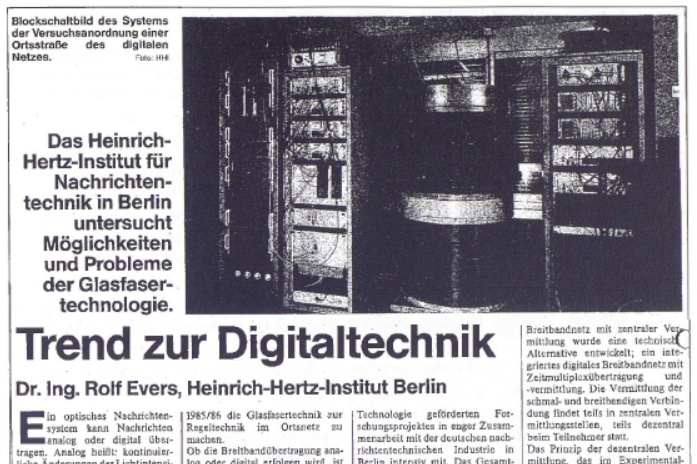 In the mid-1970s, HHI researchers began to focus on signal processing in the area of optical technology. In 1977, they succeeded for the first time in the transmission of 1.12 Gbit/s via fiber optics. Today, the institute is still one of the world’s leading research institutes in the field of optical data transmission.

In 1979, a new working group was formed at the Heinrich Hertz Institute: The research field “Integrated Optics” was established with the support of the Federal Minister for Research and Technology. In the Annual Report of 1980, this decision was justified by the fact that “optical communications engineering […] would play a key role in the future development of telecommunications”. Current tendencies showed an increase in implementing signal-processing procedures in the area of optical technology.

As early as 1977, HHI researchers achieved success in this area, which had previously hardly been considered possible by experts: A 1.12 Gbit/s transmission rate via optical fiber was achieved for the first time. The financing of this scientific sensation was realized primarily through the support and donations of the Association of Friends of the Heinrich Hertz Institute e.V., as well as through third-party funds. In 1981, the researchers were already able to transmit 2.24 Gbit/s via optical fibre.

About 40 years later, the Fraunhofer HHI is still a leading institution in the field of optical data transmission. Especially under the current head of institute, Prof. Dr. Martin Schell, research into data transmission with light has increased significantly. The rapid growth of the Internet is, among others, made possible by optoelectronic components, which are being researched and developed at Fraunhofer HHI. Almost every second Bit transported on the Internet nowadays, comes into contact with a Fraunhofer HHI component.