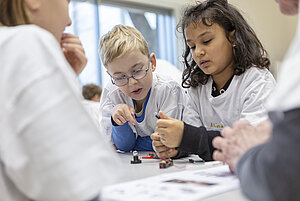 The “Gesellschaft von Freunden des HHI e. V.” (Society of Friends of the Heinrich Hertz Institute) was founded in 1924 with the aim of establishing a research institute like the HHI. The society’s efforts later changed into supporting scientific work at the institute, for example by awarding prizes and scholarships. Today, special attention is paid to getting young people interested in science and research, e.g. with the series of events "Forschen macht Spaß" (Research is fun).

In 2013, the "Gesellschaft von Freunden des HHI e.V." and the teacher Christina Proll-Schutte from the Paul-Simmel-Grundschule in Berlin-Tempelhof developed a concept to introduce primary school children to natural sciences and technology in a playful way. Since then, the concept has been successfully implemented several times:
After a preparatory phase at school, the children visit the Fraunhofer HHI in Charlottenburg for about two hours. An interactive lecture explains to them what a research institute is and what researchers do there. The children then conduct simple experiments in small groups under supervision and record them. The children craft windmills, for example, get mini-mobiles going and light bulbs shining via solar energy. During the follow-up work at school, the children inform each other about their experiments and deepen what they have learned. The visit is intended to be a memorable experience for the children, which is perhaps able to guide their choice of education and career towards the STEM subjects.

Volunteer scientists who have previously spent part of their professional lives at Fraunhofer HHI assist the children. In this way, the scientists pass on their knowledge and get the children enthusiastic about technology and science at the same time. A young participant summed up his impressions as follows: "Research is quite exhausting, but it's also fun!”

to those we recommend to become a member of the “Freunde des HHI” ("Friends of the HHI"). More information can be found here .