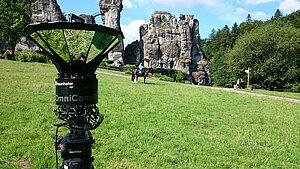 In 2007, Fraunhofer HHI sets a milestone in camera technology with the development of the OmniCam-360. The system for capturing high-resolution panoramic videos in real time is unique worldwide and was awarded the "New Product Award" for Innovation of the Year by the International 3D & Advanced Imaging Society in Hollywood in 2013.

Since 2000, Christian Weissig, head of the research group, and a team of experts at Fraunhofer HHI has been working on technologies that can reproduce video panoramas realistically, in high resolution and in real time. The OmniCam-360 was the first multi-camera system to offer the world a 360-degree panorama format for video recording. Depending on the OmniCam version, either 10, 20 or 24 micro HD cameras are arranged vertically and circularly and complement each other with cylindrically positioned mirror segments. With a resolution of up to 10.000 x 2.000 pixels, the OmniCam-360 delivers video recordings that are ideal for immersive applications.

Since 2012, the material can also be processed in real time and transmitted to end devices such as tablets and VR glasses. A groundbreaking success that revolutionized the transmission of major events. The OmniCam-360 makes the viewer his own director. By wiping, turning and zooming, he can interactively view the different corners of the respective concert hall, stadium or studio, look closely at his favorite musician, run towards the goal next to his football idol or simply let his gaze wander over the entire event. The OmniCam-360 was already in use at the concert of the Berlin Philharmonic Orchestra on the 25th anniversary of the fall of the Berlin Wall in November 2014, at pop concerts by Herbert Grönemeyer, Bon Jovi and the Counting Crows, and at the 2014 World Cup finals in Rio de Janeiro. An overview of other OmniCam-360 deployments with Ultra High Definition (UHD) recordings can be found here .

At the NAB Show in Las Vegas in 2016, a 3D version of the OmniCam-360 was presented for the first time. The 2D and 3D images were merged live and in real time and transmitted to visitors on VR glasses.

With the fourth generation of the OmniCam-360 camera system, Fraunhofer HHI has responded to the worldwide growing demand for handy 360-degree cameras.  With a size of 438 x 460 x 428 millimeters and a weight of only nine kilograms, the current version is absolutely marketable and competitive.