The scalable, mirror-based multi-camera system OmniCam was developed at the Fraunhofer HHI in the year of 2009. The third generation of the camera system allows the recording of live video in 360° panoramic format. The newest model, the OmniCam-360, can be applied in various fields due to its small size and its light weight. Still, with a resolution of up to 10,000 x 2,000 pixels, OmniCam-360 generated videos are optimal for immersive applications.

The Real Time Stitching Engine (RTSE) is a software-based solution for the real-time processing of ultra-HD panoramic recordings. The software supports all necessary steps to process a certain number of omnidirectional camera images into an ultra-HD panorama. Processing includes color matching, warping, stitching and blending. 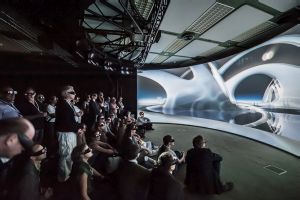 Behind the acronym TiME Lab (Tomorrow‘s immersive Media Experience Laboratory) hides an entire chain of systems and applications, which we unlock while working on projects. In the showroom setup in Berlin, experts integrated innovations in the areas of 180° video projection, steric audio rendition and the real-time broadcasting of panoramic recordings.