We have been active in developing coding solutions for 3D video for several years and have successfully contributed to the major international standards for 3D video coding. With a new, emerging generation of 3D displays that do not require glasses, 3D video formats like multiview video plus depth (MVD) [1] have gained importance. We have played a leading role in developing the 3D video extension of H.265 / HEVC (3D HEVC) and a comprehensive overview of the technical features can be found in [2].

The role of coding and transmission in the 3D video processing chain is illustrated in figure 2. The acquisition of MVD consists of capturing a real world 3D scene by two or more cameras (multiview video), followed by the sender-side processing for obtaining sample-accurate depth maps, i.e., depth estimation. After encoding the MVD sequences, the bit stream is transmitted to the receiver-side. The scene geometry information provided by the depth maps enables rendering views of the scene from various additional perspectives via depth-image-based rendering (DIBR). Hence, the suitable set of views for different 3D displays and applications can be rendered from the decoded video and depth data.

3D-HEVC builds upon the multi-layer coding design of HEVC, where each video or depth sequence of each view represents a different layer and prediction between layers is enabled by so-called inter-layer dependencies. The different supported types of inter-layer prediction are illustrated in figure 3:

The base-layer (L0 in figure 3) corresponds to a video layer that has no inter-layer dependencies and is consequently fully compliant to HEVC, while additional block-level coding tools have been included for coding the dependent video and depth layers (L1 to L5 in figure 3). Compared to simulcast coding, bit rate savings of about 70% are achieved for the dependent layers [2].

We have developed a wide variety of 3D video coding tools that are designed for exploiting the statistical dependencies between video and depth views, and explicitly adapted to the specific properties of depth maps: 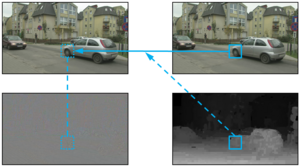 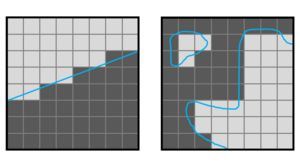 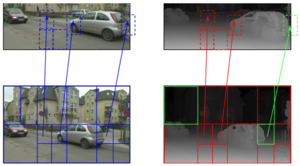 For increasing the end-to-end quality of a 3D video coding system, we have also developed improvements for the decoder-side view synthesis (DIBR).

NOTE — Links to the specification text and the reference software of 3D-HEVC can be found on the HEVC support site.