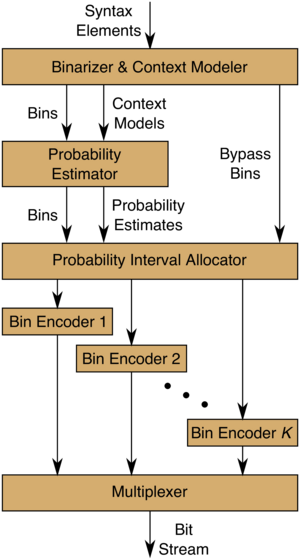 The probability interval partitioning entropy (PIPE) coding concept [1] uses the same flexible and efficient binarization, context modeling, and probability estimation techniques as CABAC while the M coder is replaced with a number of so-called fixed probability bin encoders. The main building blocks of a PIPE encoder are shown in the following block diagram.

The key element of the concept is a partitioning of the model probabilities into a small set of probability intervals and thus a categorization of the bins (binary symbols) according to their probability estimates. The probability interval allocator forwards bins of one interval to a dedicated bin encoder that is optimized for a single representative probability. Each bin encoder produces a separate encoded bit sequence, which is multiplexed into the bit stream. Bin coders can operate independently and thus in parallel, which makes PIPE coding suitable for applications where a particularly high throughput is required.

A bin encoder can efficiently be implemented by using a so-called variable-to-variable length (V2V) code, which forms variable length bin words and maps them to variable length code words. A V2V code can be designed to have an arbitrarily low redundancy for a given fixed probability. Consequently, the redundancy of the PIPE coder can be made arbitrarily low by increasing the number of probability intervals and selecting suitable V2V codes. For example, with an appropriately designed set of 8 V2V codes, only a negligible averaged bit-rate increase of less than 0.5% is observed in comparison to the M coder.