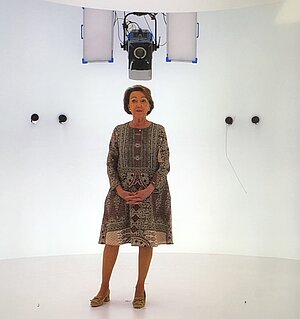 Volumetric Virtual Reality Experience with a survivor of the Holocaust

This project is funded by the foundation "Erinnerung - Verantwortung - Zukunft" (EVZ).

In VoViREx, a virtual reality experience is developed presenting the Holocaust survivor Dr. Eva Umlauf (born 1942). In six episodes, she tells about her life, from her childhood to the present. The volumetric recordings that Dr. Eva Umlaufs "embody" and depict, are enriched with further information and media on the war and post-war period. This creates a space for experience that is freely accessible through the media, in which learners deal with the long-term effects of the Holocaust using a combination of biographical and historical information.

Already in May 2021, we had the opportunity to film Dr. Eva Umlauf in the volmetric video studio of Volucap GmbH in the film parc Potsdam-Babelsberg. She told six different episodes of her live, starting with Novaky, the place of a Slovakian concentration camp and her place of birth in 1942. A total of 50 minutes of video material from 32 cameras was recorded, which now serves as the basis for generating the volumetric videos. In total, six different episodes of her live were told by Eva Umlauf.

This project is a collaboration between the Fraunhofer Heinrich-Hertz-Institute and the Ludwig Maximilian University of Munich, Prof. Dr. Anja Ballis and Prof. Dr. Markus Gloe. We thank Dr. Eva Umlauf for telling us her story and for being recorded volumetrically.